The YMCA of Middle Tennessee continues to enjoy improved financial performance. 2019 was our fifth consecutive year of strong financial results thanks mainly to increased Membership and Government Grant revenue, which was sufficient to offset increased operating expenses. The major expense items that increased significantly included medical costs that exceeded budget by $547,000, and $345,000 in unanticipated property repairs. 2019 was the fourth consecutive year our staff has received a global merit increase. Our people are by far our most valuable asset, and we will continue to invest in them as our financial circumstances allow.

Our Net Assets increased by $3.32 million during 2019, a significant improvement from the $0.35 million decline experienced in 2018. By far, the largest change from 2018 was the $6.2 million gain realized on the sale of the 900 Church Street building, which formerly housed our data center and a portion of our Association Office staff.

Revenue from public support (contributions, foundation and corporate grants, and net proceeds from special events) was comparable to the prior year at $4.65 million, excluding the gain on the real estate transaction. Increases in three categories drove the $4.75 million increase in other revenues. Membership revenue increased by $2.28 million, and program revenue increased by $1.12 million, including increases of $570,000 at Camp Widjiwagan, $280,000 in School Age Services, and $246,000 in the membership centers. Government Grant revenue increased by $1.06 million, due mainly to our YMCA being awarded oversight for all five Nashville After Zone Alliance (NAZA) zones; in the prior year, we oversaw two zones.

Non-personal costs increased by a modest $692,000, with modest increases across most expense categories. Awards, grants, and assistance increased by $595,000 due to pass-through payments to our NAZA partners providing after-school programming.

The YMCA of Middle Tennessee continued to maintain its improved financial condition during 2019. The major event impacting our financial position during 2019 was the previously mentioned sale of the property located at 900 Church Street. The proceeds of the sale of $6.69 million were utilized to repay all non-bond interest bearing debt; our only interest-bearing debt is now our long-term bonds payable. Due to the application of the sales proceeds and to routine amortization of the bond principal, our debt declined to $39.07 million at the end of 2019, from $46.44 million at the close of 2018.

The other significant changes in our Statement of Financial Position are the $1.22 million increase in our Interest Rate Swap Liability and the $2.51 million decrease in Net Property and Equipment. In 2015, we entered into a fixed-rate for floating-rate interest rate swap to decrease our exposure to fluctuating interest rates. Declining interest rates, such as those experienced during 2019, increase the liability owed to the swap counter party due to the underlying floating rate being significantly less than the fixed rate in the swap arrangement. The decline in Net Property and Equipment is a result of depreciation expense continuing to exceed capital expenditures.

After five years of strengthening financial performance, the YMCA of Middle Tennessee began fiscal 2020 very strong, with operating results approximately 35% favorable to budget. In early March, a tornado destroyed our three Y-CAP properties in East Nashville, and then in mid-March the pandemic significantly impacted our YMCA, as it has many organizations in the Middle Tennessee area. Membership centers in the outlying counties were closed mid-March until early May, and the Davidson County centers did not reopen until early June. Membership revenue and center utilization have declined significantly, and the length and severity of this decline is difficult to predict.

Our School Age Services business unit pivoted from providing before- and after-school care to providing full-day care to children of workers deemed essential by our local governments. Camp Widjiwagan was prohibited from providing its very successful resident program, but was able to offer an abbreviated summer day camp program which grew to serve more than 500 children in its final weeks.

Our response to the pandemic has been difficult and painful. We have adjusted our staffing and spending to reflect the reduced revenue. Thankfully, over $4.7 million in grant revenue has been received from a variety of federally funded programs, and over $1 million was raised from donors to help fund our YMCA’s response to the pandemic as we strived to serve the rapidly changing needs of our community. We have spent approximately $4 million in COVID-related expenses for which we have applied to FEMA for reimbursement. We also recently received $4.2 million from our insurance carrier to cover damages to the Y-CAP properties, and an additional $1.5 million from the sale of two of the three parcels formerly owned at that location.

The hard but necessary decisions that have been made since 2013 have resulted in our YMCA being in a strong financial position to sustain itself during difficult times. We continue to focus intensely on making sound financial decisions for the long-term health of the organization while striving to best serve our vibrant and dynamic community for years to come. We appreciate your continued support and encouragement as we work to fulfill our mission.

May God bless you richly! 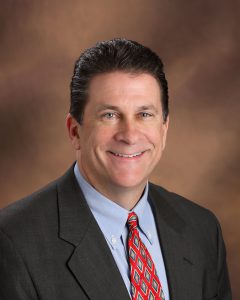 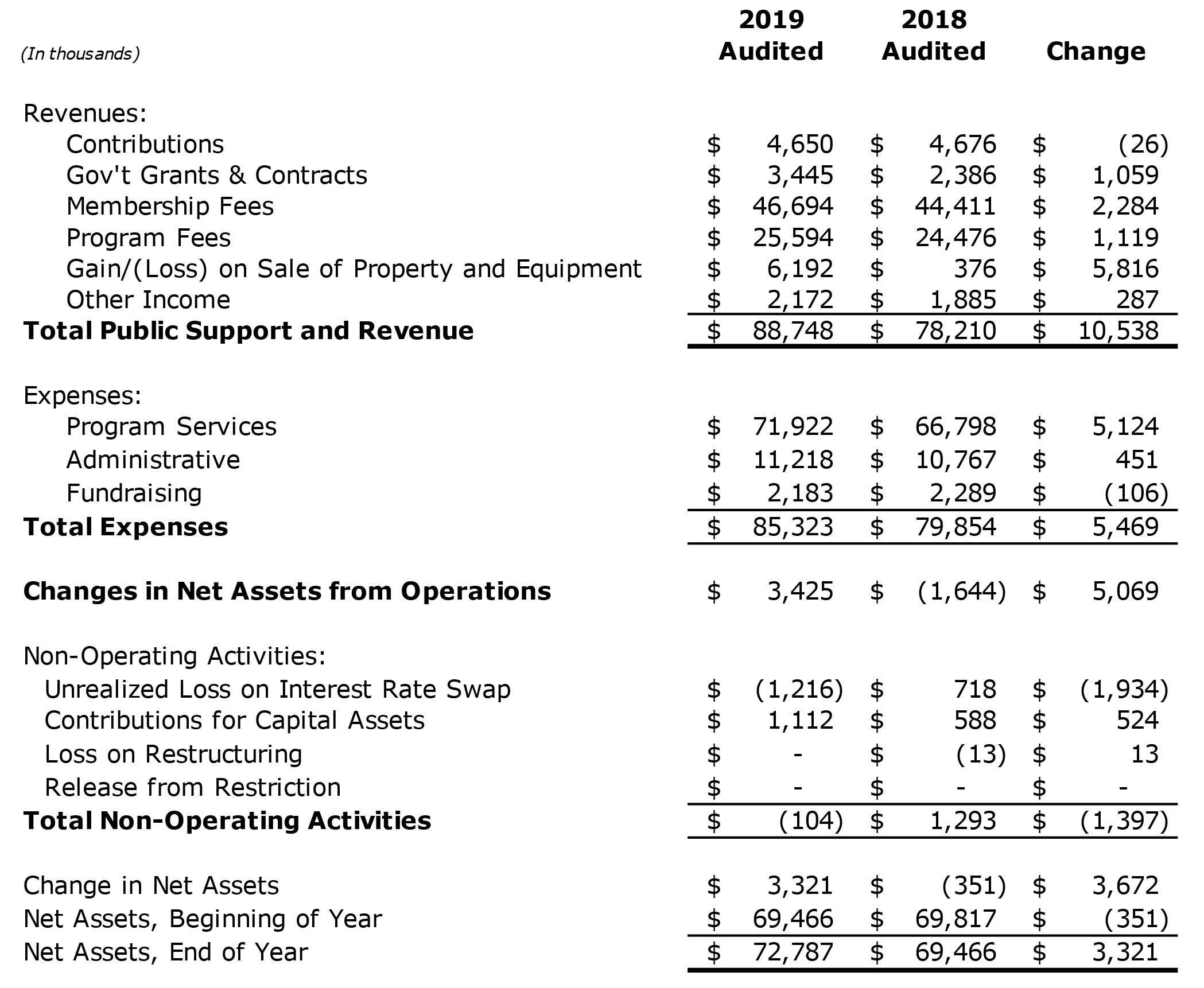 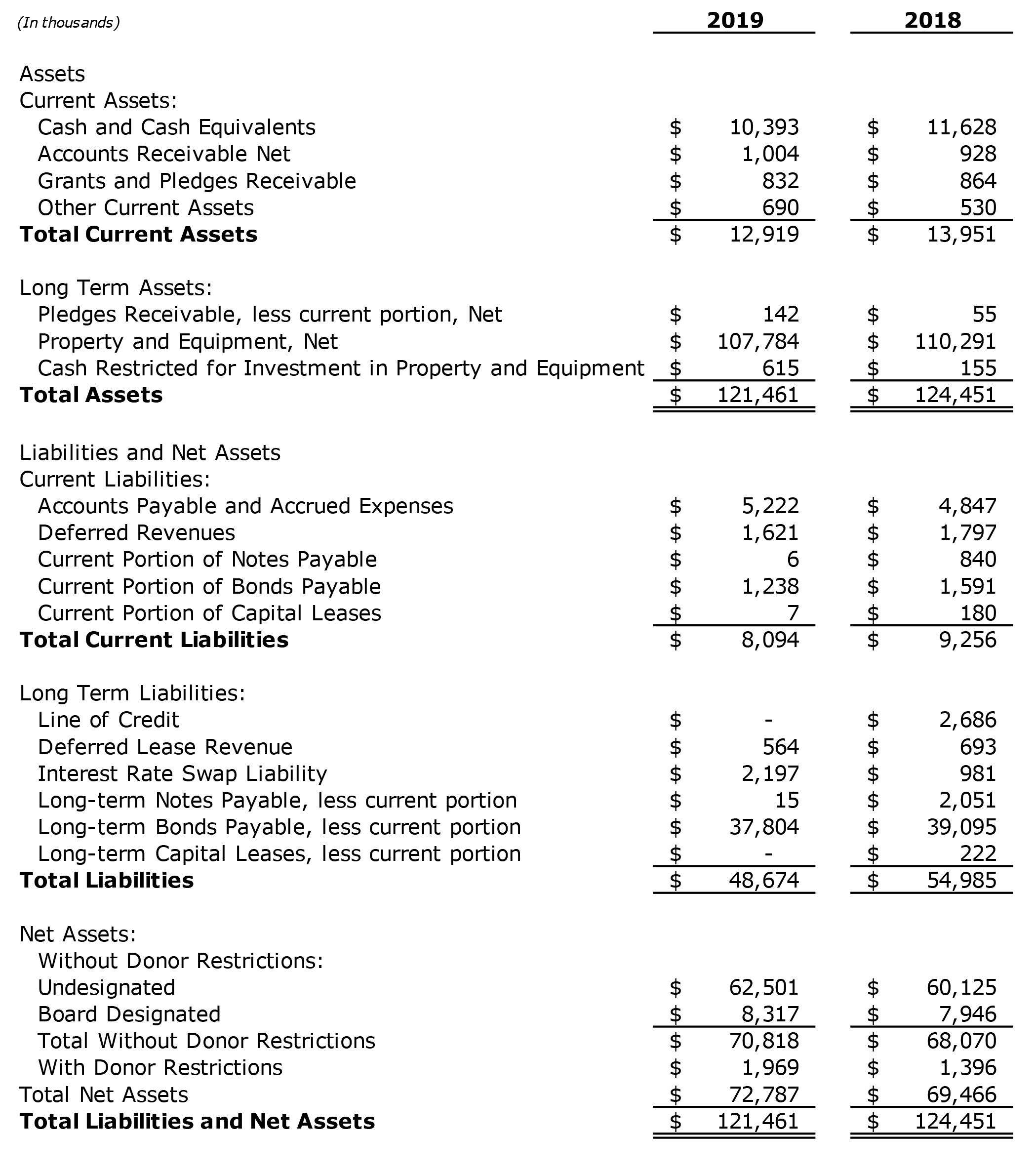